get error message…seems right to me…but maybe you want one step at a time?

You only want to print 2 decimal places.

I think that this exercise is built so it recognizes only one possible way of solving this problem.

According to my example: When I typed on the second step:

But it did not go through

I agree; however when I type that on line 1 it is rejected

It keep showing the message: “Did you declare a variable called meal?” But i think i already declare meal!!? 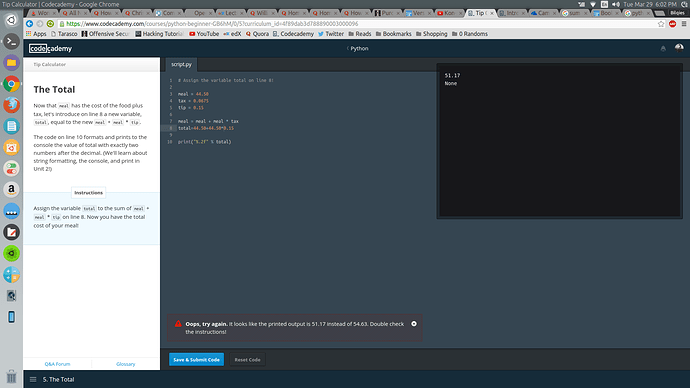 Assign the variable total on line 8!

Oops, try again. It looks like the printed output is 51.17 instead of 54.63. Double check the instructions!

You need to declare the variable as meal, not variable_meal or else the program won’t recognize it

This should fix things.

This post was flagged by the community and is temporarily hidden.

it did, thanks a lot.

here is my way:

Explanation:
These variables names are already assigned with the values and just related them.

Hello Im doing this and give a wrong result…

Someone can help me?
Thanks
Leandro

The total on line 8 needs to take into account both the tax and the tip. The idea of line 5 is to re-assign the variable meal so that it takes into account the tax. Therefore, by using the meal variable in the total you only have to account for the tip.

The way you have written it (using the original value for meal) means that the tax is not taken into account.

Hello!
You help me to resolve, thank you!!!

here is my version.

What am I doing wrong?