Why do lines of code after a for loop have to be indented?

In this exercise, the code for the for loop has to be indented. Why does it have to be?

Indentation in Python is used to identify lines of code which are executed together. The block of code that is part of for loop has to be indented so that Python knows what to execute for each iteration of the loop. The point at which the indentation ends identifies the code that is NOT part of the for loop.

indentation means that all the codes you are writing is under less indented statement. If there is no indentation than it will be running outside the statement.

Just curious, how would we modify the code so that there is space between the executed printed list? 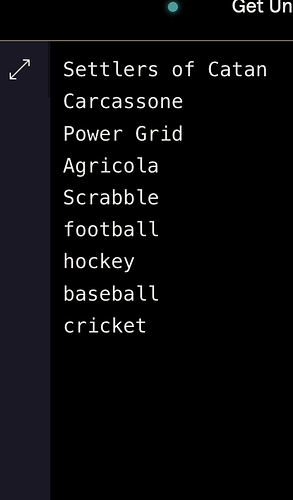 The print function automatically adds a newline at the end of each string when it’s called (this is why each new call to print is on a new line in your output).

You could work something out with multiple print functions (an empty print function for example would give you an empty line) but the simplest might be to modify the newline that gets added at the end of every string.

The syntax may be new to you here chances are keyword arguments and default values have yet to be introduced but you’ll eventually run into more of this when you cover functions in more detail.

The point at which the indentation ends identifies the code that is NOT part of the for loop.

indentation used for action command after loops (for [temporary variable] in [collection]: )
#mynote