Hi,
I’m struggling with the US American Insurance. I’ve some ideas of what I want to analyze. I was trying to find out the avg cost of the insurance by sex. I’ve two paths and I want to test both of them. One is with dict and the other without.

Here I was working with the without and when I ran the code, it says I don’t have the female_count or male_count define. What I’m missing?

It looks like you have the wrong arguments for the cost_per_sexes function on the last line.
There should be something you can use for listofSexes and listOfcharges

The weird part is that it says that male_count is not defined, and I did it inside the formula. 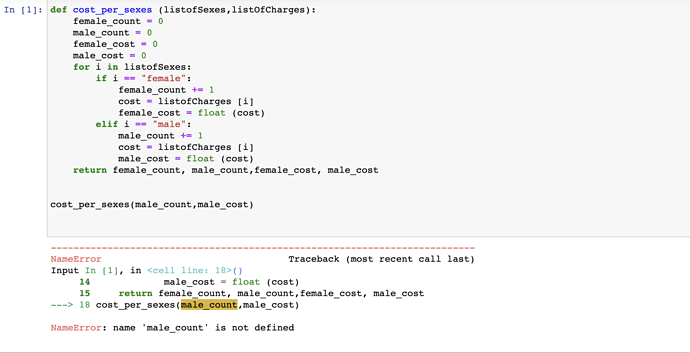 But if I moved the “return” inside, I will have the same issue. Sorry, I’m not following how I can solved this.

possibly with the appropriate lists for listOfSexes and listOfCharges if (those variables are named something else before the function).