Stuck at the very Beginning of MuscleHub Project -- Maybe a glitch? 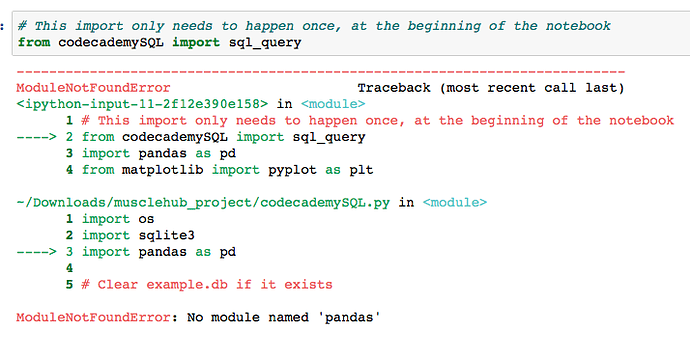 Something is wrong here (See screenshot).

This is from step 1 of the muscle hub project, where it is just giving examples of how to proceed.

If I take the line of code from the example (“from codecademySQL import sql_query”) and remove it, press Run, then paste the exact same line of code back in, then press Run again, it returns a ModuleNotFoundError. The error says “no module named pandas.”

Why can’t I import pandas? Did I not download python correctly? Is it because I downloaded miniconda instead of anaconda?

Please help, I’ve been going steady at this for a while, but now I’ve hit a brick wall and it’s frustrating. Thanks!

Why can’t I import pandas?

Pandas isn’t part of the core Python library, and I don’t think its included by default in Miniconda either. The error you’re getting is telling you as much, by saying ModuleNotFoundError: No module named 'pandas'.

This topic was automatically closed 18 hours after the last reply. New replies are no longer allowed.