Steph Curry and the Finals MVP

I really enjoyed doing this project. It was actually the reason I started the course in the first place. I built a K Neighbors model to predict who WOULD have won the 2015 NBA Finals MVP based off of voting patterns. The case for who SHOULD have won it is too subjective/long/a different argument altogether.

It took me like 40 hours to finish but that’s mostly because I was very caught up in wrangling the data. The actual analysis was more like 2-4 hours.

There are improvements to be made on my model. I list them in my Jupyter Notebook. Here’s the link via github: 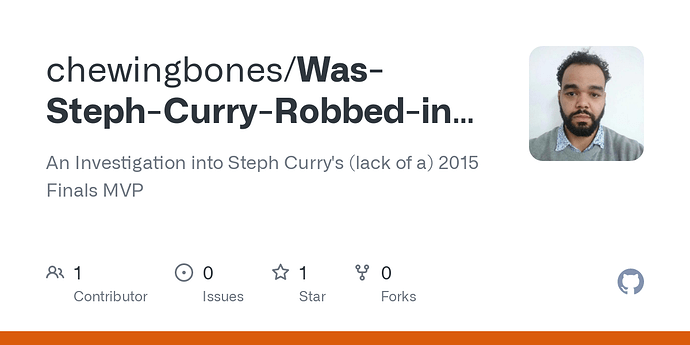 GitHub - chewingbones/Was-Steph-Curry-Robbed-in-2015: An Investigation into...

I too totally agree he was robbed. I am such a super Steph Curry fan and NBA fan that I took the data science course just to destroy arguments on Twitter using stats. I love your work, phenomenal work(biased opinion from Steph fan but still awesome stuff here dear sir!!)

Thanks! And yes, he was definitely robbed but at least he erased all (unfair) doubt this year.