If you are lost with this project… please read on. It’s not your fault.

I must say as a beginner I was so frustrated with this project, not because it’s hard, but because the step by step video tutorial makes things even worse. I was following the video along and could not get my code to work several times. Then I noticed, the person who recorded this video, made a lot of mistakes they would then fix without saying anything in the video they went back and made changes.

Some examples: @ 6:19 he had written:
if (userInput === ‘rock’ || userInput =‘paper’ || userInput = ‘scissors’) then before he runs the code, the video gets cut (meaning the video was edited at that moment) and then the code runs wihtout issues.

But my issue is that he doesn’t say anything. Making it seem like there is no issue at all. If you were following the step by step instructions, you will be left with the code with errors, and if you don’t notice he made those changes on the video you might start to wonder why did he use === in the first instance, but = in the other 2 instances, I thought I was learning something new, but I was actually right the first time when I noticed something weird with only using 1 = sign.

My advice, watch the tutorial but don’t follow it step by step, wait until the tutor runs the code, and check the changes he has made without telling anybody. The same thing happens through the video, also when he wrote the GetComputerChoise, at first he used randomNUmber and then he corrects it to randomNumber without saying anything.

So if something doesn’t work, wait until he runs the code without issues and go back to your code and make the adjustments he made. 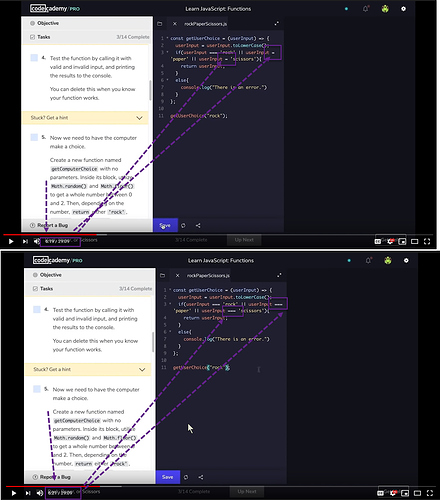 To be honest you shouldn’t watch those videos at all until you finished the exercise yourself. The hints in the instructions already help a lot

Hi! I guess we have different methods of learning… Also, I mentioned that I am just a beginner and in my own learning experience, sometimes the instructions don’t make sense until you see someone actually implementing them. Also, at the beginning of the course they say that you can follow a pro step by step. I get what your saying, you should always try to apply your knowledge, but for me there is nothing to apply since I am basically getting started in learning.

The frustrating part is that as a newbie, you don’t know if someone is making a mistake, and it doesn’t help if they make a mistake and not correct it through the video. I noticed he did in the end admit of one typo but what about the other ones?.. Anyway, thanks for your feedback!

Didn’t mean to be rude

. But I understand your frustrations, I’ve been reporting a lot of errors since I joined the Codecademy courses. You can always ask us peeps on the forums for tips and tricks

You weren’t rude at all and thanks so much for the help offered! I will be in touch for sure.

It’s important to note that these forums are monitored by non-staff, and very little of the information posted here ever makes it to the right ears. We are the middle persons, and have no real sway as matters of concern go. What happens, happens. What doesn’t, doesn’t. It’s a crap shoot from where we stand. Same crowd, just a little closer to the gold seats.

The burden is on us, though, since we non-staff volunteers are on the front lines when a disgruntled learner comes forth. We don’t have HQ support, and only guess at what might be the problem. If there is a workaround or solution that we know of, we share it. If not, then only the sands of time will get us to a solved case.