How does `.then` know what to pass?

In the example for this exercise, the handleSuccess function takes in a variable and logs it to console. My first question is how does the prom.then function know which handle function to pass through? Since the resolvedValue variable doesn’t explicitly refer to the resolve outcome, how does it know what to log to console?

Did anyone reply to this question yet? I also wonder how the .then() method knows which handle to use for resolve/reject. I swapped them in the syntax but the result remains the same so somehow the method knows which one is which not just by the order they appear in, I just don’t get how.

It actually is just based off the order of the arguments.

The first function you pass in will always be used for resolve, the second for reject.

It is a bit confusing in the example, because even if you do swap the arguments, the result is the same. But that’s just because the success function and failure function do exactly the same thing: take in a message and print it to the console.

You can modify the functions a little to make it easier to see which one is being called, by adding “Success” or “Failure” to the start of the message:

Then, you can try swapping them around in the .then(). You should see the first function you pass to then() is always used as the resolve function, even if it says “failure,” and vice versa.

Hello guys,
I have a question related to part 6, specifically to this example: 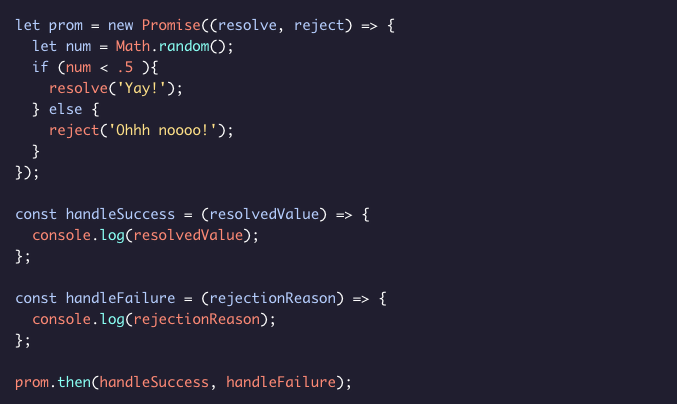 If ‘handleSuccess’ and ‘handleFailure’ are functions that take in one argument, why when they are inserted in ‘then(handleSuccess, handleFailure)’ don’t take any arguments?

I’ve the doubt that’s a stupid question but I must resolve this.

Thanks for your answer.

callbacks do not take arguments because they are not invoked when passed in. Only the representation of the function is given. The then method will invoke the one that matches the outcome. The first callback is for success, the second for failure. then decides which to use and gives the appropriate argument at that time.

I don’t think I fully understand this code in the example:

Is an anonymous function being declared inside the Promise() function instead of declaring it separately and then passing it into Promise() like we did before?

Also, how does it know what to pass in for the “resolvedValue” parameter?

I am fairly certain that the method does not “know” anything. Both handleFailure() and handleSuccess() do exactly the same thing, they log the parameter that was given to them by checkInventory() to the console. That means that it doesn’t matter which comes first, the outcome is the same, even if you delete one callback function (i.e you invoke checkInventory(order).then(handleFailure), for example).
However, I really don’t know what the creator of this exercise wanted to show us when she/he created it…

I’m having a hard time comprehending why callback functions do not need arguments, still the necessary arguments somehow show up just when we need them to. Could you kindly explain this, or provide a link to this topic? Thanks!

We pass only a reference to the callback. The parameter x takes a value from the array as .filter iterates over it.

Same thing as before. .forEach() iterates the array and passes the value to the callback parameter.

The first function you pass in will always be used for resolve, the second for reject.

In your example, the method then of the prom is the higher-order function. it takes a callback, passes the resolved value to it, and calls it. it doesn’t care about its name, just looks for a function definition and calls it.

Thank you man! this really helped me understand this lesson!

myButton.addEventListener(“click”, myFunction);
then the x parameter gets initialized to new Event( ) ?

Can’t say for sure whether it’s a good idea to have multiple parameters on the handler. event, or even e is sufficient to identify the event object. There is never more than one event object in memory at a time and it is highly transient, lasting only until another event is fired.

If, as you suggest there are multiple parameters on the handler, I can’t see how the listener will know to include them in the handler call. This will undoubtedly mean more research and experimentation.

See if you can come up with an example that we can experiment with.

Can you put this in a REPL.IT so we can run it?