Glitch on links and text decoration

its keeps saying change the decorations to none, and i did it like how its said i have no idea what im doing wrong. 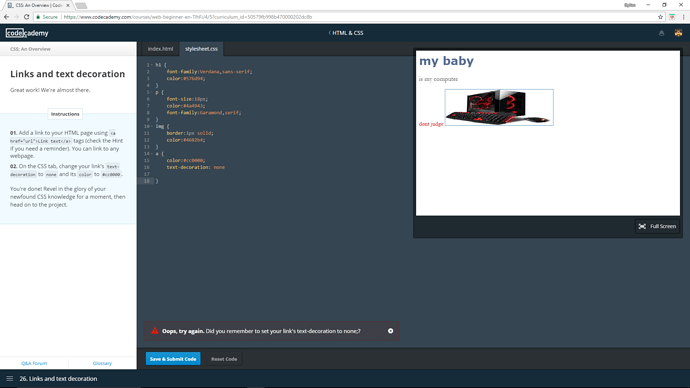 Remember to enclose your value inside your property, hint: property: value;

that didn’t change a thing in how it responds. its still says the same issue. I continued to another lesson. and the same thing happend.

The same thing is happening to me too. It always says change the decorations to none.

It seems like there’s something wrong with whatever code checks the “text-decoration” part; I skipped that lesson when it gave me the error and on another lesson the same message appears.

EDIT: It’s the “text-decoration” code in general. I went on to CSS Selectors #7 now and it incorrectly states that
“It looks like you accidentally removed the text-decoration from the link outside the unordered list.”

Yea I got to that part too and it happened, at least for me it still marked the course as complete.

This is happening to me too, please help!

With everybody saying it’s not working, it is most likely a bug in the tests checking if the lesson is correct, request moving this to bugs instead.

you miss a semi-colon after none, you could try that

@thinkverse, i think reporting a bug won’t do much good. Its the old learning environment, which is no longer supported. So its highly recommend to update to the more recent supported course:

it didn’t work
it is a bug

Just because i make a suggestion for someone doesn’t mean it works for you too, you might have a different problem. Doesn’t mean its automatically bugged

it happen to me.
it is like a bug.
the chromebook i have will say it

it could indeed be a different bug in your code. Although the course is no longer maintained, i checked, this exercise is still working. Just saying its a bug, i can’t help you.