Puzzled by this result - I want to test significance between the mean of samples and the true population.

Null hypothesis is samples are NOT representative if there is propability below 5% that sample mean != true_mean of population

I get strange results with p_values, all more than 0.05 , even for the smallest sample.

Can you help understadning why or how to interpret a the qualitative meaning of “extreme small sample” if a t_test yields such result?

Isn’t the null hypothesis confused with the alternative hypothesis?

The null hypotheses examined with the above code is:

If the p-value is over the significance level (0.05), it means that this null hypothesis cannot be rejected.

Hey, I’ve been going through the data scientist path and currently working on the central limit theorem.
Here’s the link to the page

There is a line which isn’t making sense to me when I go through the heading ‘How does this help the data scientist?’.

Once we calculate the standard error as part of the CLT, why do we have to multiply it with 1.275? Then, the next line multiplies 1.275 with 1.96. It is interesting to mention here that 1.275 is the standard error given. Refer the screenshot below: 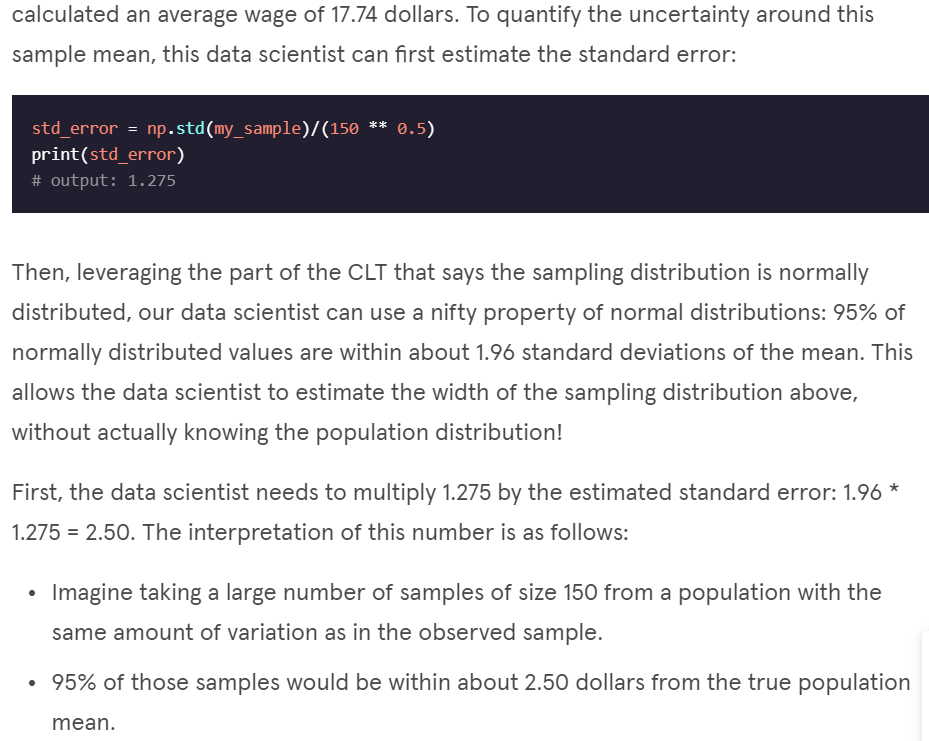 Can someone please explain to me what’s going on here?

First, the data scientist needs to multiply 1.275 by the estimated standard error:

I thought that this was a typo but to be sure, I wanted to run it by someone first.
Awesome! I get it now. The wikipedia page clears out a lot of confusion. Thanks for helping out, @object2161442840!