This community-built FAQ covers the “Scaling Images and Videos” exercise from the lesson “Sizing Elements”.

FAQs on the exercise Scaling Images and Videos

Could you explain, how the following code works? Am I right that the first property is more specific than the second one?
If so, why do we encode the second “display” rule, especially since it seems to conflict with the first?

There is no conflict as the first rule (.images .image-container) controls the 2 images at the bottom of the page, the one with the camel and the map. By setting them to display: inline-block we are allowing the 2 images to sit next to each other as opposed to on top of each other. Now remember that we are targeting the <div> with class="image-container" within another <div> with class="images", this means that the first picture, the one with the market, will not be affected as that picture does not fall within the <div class="images">.

Here is the HTML:

Notice how the market picture does not fall into .images .image-container, and so there is no conflict.

Why didn’t we use width instead of max-width. Since overflow is set to hidden then the content overflowed will be hidden from view anyways.

In this lesson it ask us to:

set the display to block . This will instruct the images to behave as block-level elements and facilitate scaling (as opposed to their default inline behavior).

Could you please explain how block-level img are able to scale and inline and inline-block aren’t?

If you set the width of the <img> element to 100%, it would take up the full width of its parent container at all times.

Here’s where I read this:

Why do we use maximum width 100% to see a full image and not minimum width? CSS FAQ

Hi, I’m having a hard time understanding this statement:

Can you please elaborate this one using another example? 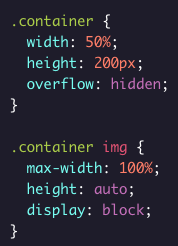 in 8/19 #4 we get this
" Finally, within the same CSS rule, set the display to block . This will instruct the images to behave as block-level elements and facilitate scaling (as opposed to their default inline behavior)".
How are the images still inline even though we’ve changed it to block? Shouldn’t they be on different lines?

I was confused about what they meant by “facilitate scaling” too. However, earlier they mention “the last line will display images as block-level elements (rather than inline-block, their default state). This will prevent images from attempting to align with other content on the page (like text), which can add unintended margins to the images.”. I understand that we don’t want the image to be on the same line with other content, but I don’t have a clear answer to your question.

I saw no difference when I just used max-width, and when I added the other properties - height: auto &display: block. So what was the point of them?

I was about to post exactly the same comment! I think a lot of this css stuff only makes sense when you are building your own pages and have to start tweaking things to get it to look the way you want.

Yeah you’re probably right. I just chalked it up to the fact that there are probably some CSS properties interfering with the max-width that we haven’t been introduced to yet

I’ve got years of experience with CSS and I’m still torn between calling this particular lesson useless/more harm than good, and calling it a valuable intro to the endless issue of CSS properties either not having any prescribed effect on an element, or being redundant to existing effects in the first place.

Either way, it’s probably overdue for a rewrite.