The body of the for loop runs like this:
std::cout << element << “\n”;
Here “\n” is an escape sequence (it basically helps to format the output on the monitor)
which makes the control go to the next line. When the loop runs again, the output for that iteration will appear on the next line. Hope this helps

Did the same thing until i noticed that I used () instead of the needed {} to enclose the num, num2 num3 in the vector definition. 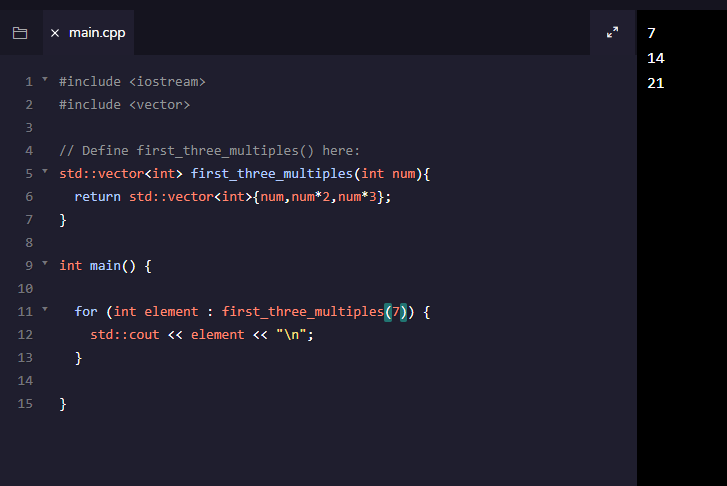 I have same issue…output is also produce correclty 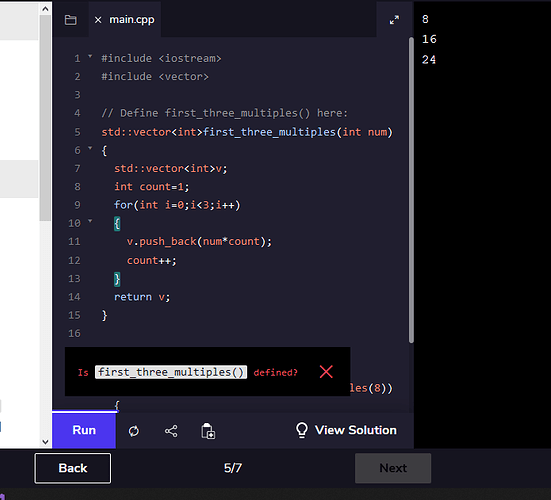 @citrus7 it have main function which is hide behind prompted message.(i.e Is first_three_multiples()).

Please refer following link to know what is the main reason to cause this problem.
link: Error in First Three Multiples

according to suggestion given by codecademy moderator…it produce result without an error. 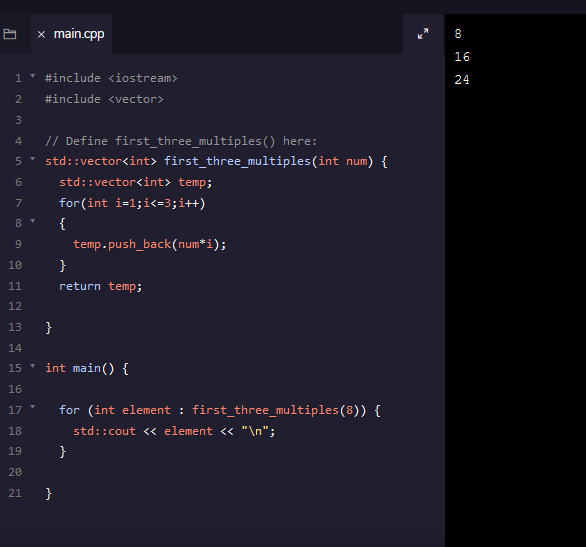 What does the for-loop do in this program? the syntax seems wrong compared to previous lessons. no semicolons and only 2 parts? the challenge doesnt explain it at all. how does the value of “first_three_multiples(8)” get put in “element”?

it’s called range based for loop.

I am not having much knowledge about this,
but basically iterate vector from i=0 to i<vector.size()
and each time of iteration it assign new value to the variable(‘element’).

when i=0 => element=8;
i=1 => element=16;
i=2 => element=24;
for better understanding of range based for loop read following article
link:- https://www.geeksforgeeks.org/range-based-loop-c/
(also you can check on IDE which can give better idea how range based loop works)

You would have a vector that looks like this: {11, 11, 11}. Then you append the first three multiples of 8 to that vector, so your output would be:

When you removed (3), you instantiated an empty vector {} rather than a vector with 3 elements assigned the value of 0 by default {0, 0, 0}.

Code will not pass but i have it working on the console i have an output of 8, 16, 24. but its not passing! I have checked several times and im sure of my code, but even without looking at the code i clearly have passed as the requested output is working!

"Both includes iostream and vector added.

Hi! Had the same issue as well. Defining vectors is a tricky business. It is as follows std::vector then type enclosed in <> and vname .
Good luck!

Hey, if you are wondering why it’s not letting you pass the lesson even if the output is correct, check to see if you have done these things:

So if anyone already has the space and it isn’t letting you pass, try removing it. 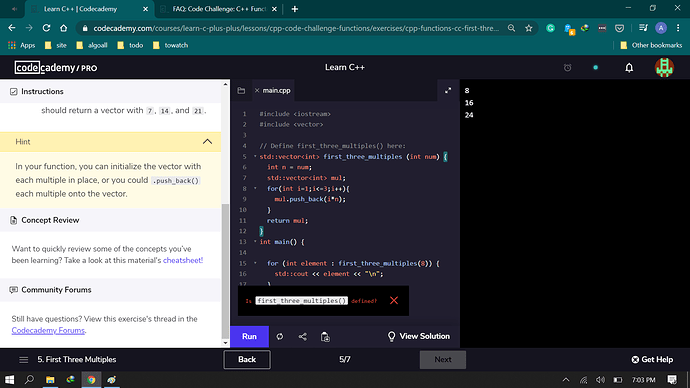 As @jppappas.jp noticed about @code6998751430 's code, the multiples vector should be initialized using curly braces {} instead of parentheses (). That is why the compiler is throwing errors. If you post your code, perhaps someone will point out a mistake.

Burh, this is the shortest and cleanest code i’ve seen so far. Easy read.

This is what I did: