I download the boss machine project then npm install which errors, what should I do next?

After some reading found that if I changed package.json lines from

Lots of deprecated warnings however npm install did complete and I could get tests to run. Also these were helpful

I encountered the same problem and would have been stuck were it not for your answer. Thanks for sharing.

Oh man, thank you so much!!! I was really struggling with the same errors until I saw your post!

Thank you for doing the research on this.

This was helpful. thanks !

Thank you so much!!!

Thank you very much! Worked for me

Hello, thank you very much. It was helphul but problem was not fix yet, I mean still to many errors and it seems dosent want to start.

When you unzip the file, it could be that you have 2 folders with the same name
project-4-boss-machine-start

within the first one, you may have a package.json file.
Move this file into the second folder. 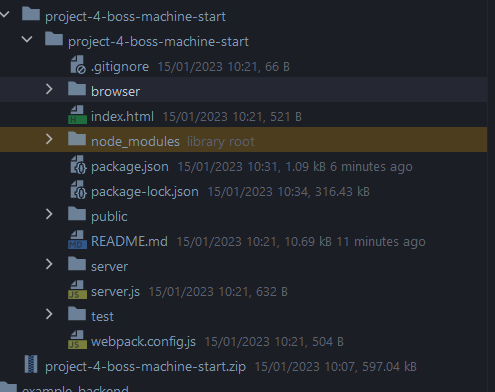 That worked for me.