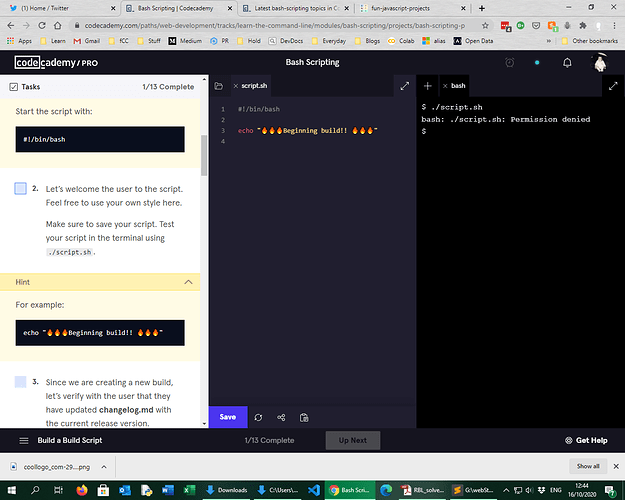 Does anybody know why, when I run my script I am getting ‘Permission Denied’. So far all I’ve entered is the shebang line and the initial echo statement. Grateful for any pointers.
Cheers
Lud

the most obvious thing to do would be to check the permissions:

Which from my understanding means I have read and write permission, but doesn’t seem like I can run the file, which is the error I keep getting.
Have I missed something in the instructions, am I required to change the permissions to allow me to run this?

the second sets all permission explicitly.

I’ve tried both commands and the second command works.
Thanks for your assistance
Cheers

Hello, I can confirm this is an issue right now. I completed this successfully a few weeks ago, but now running the same steps doesn’t work as instructed. This might be caused by the upcoming changes to the Learn the Command Line course that were announced. You can get around it by giving the script execute permissions with chmod +x ./script.sh Then you’ll be able to continue with the rest of the lesson. [image]

If you give permission using bash it should resolve!