<PLEASE USE THE FOLLOWING TEMPLATE TO HELP YOU CREATE A GREAT POST!>

<Below this line, add a link to the EXACT exercise that you are stuck at.>
https://www.codecademy.com/en/courses/make-a-website/lessons/site-structure/exercises/add-video

<Below this line, in what way does your code behave incorrectly? Include ALL error messages.>
There are 0 error messages. When I click run, the video plays, but it is telling me that I did something wrong

Need a set of wheels while you're in town? Use Ollie to pair your perfect vacation with a stylish, affordable bike rental. Here is a list of cities where you can find us.

@brigandsrealm
And wat happens when change your

AND
then do a refresh Browser
Always refresh the browser after making corrections:
CTRL f5 ( if on Windows or Linux)
CMD r ( if on a MAC).

Sorry for not replying quickly. But I tried what you said, but it still won’t let me pass.

@brigandsrealm
Your code seems to be Ok.

Click the submit 3 or 4 times in a row
maybe you are asked if you want the code, then click yes…

I clicked run several times, and nothing different happened.

Hi,
I have the same problem: the video plays, but Next button is’t active.

Try changing codeacademy to codecademy is the url.

Hey there, I am running into the same problem: 8/13 is not allowing me to progress, though the video is playing just fine. I am getting an error message that I have not entered a width parameter, but that’s not the case. Any assistance here would be most appreciated. Thanks

Figured out my own issue: just had to C + V the code rather than manually typing it in. 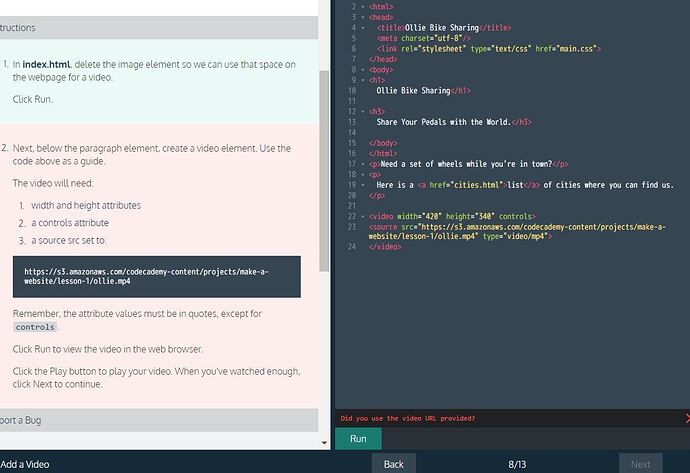 I think it is better, if one understands the concept.

It all start’s with you,
using a Browser
in which you load a HTML-file,
which we will call the HTML-Document.

This document has a minimal build of

The Browser =load’s= this document into Memory
in a pattern that is described as
the Document Object Model
in short the DOM.
( the interpretation of the DOM is Browser & Version specific )

In the description of your document in DOM-talk…
you will encounter terms like:
parent children sibling descendants ascendants…

The ‘head’- and ‘body’-Element,
both being children to the ‘html’-Element
are siblings to each-other.

This page lists all the HTML elements, which are created using tags.

The HTML style element contains style information for a document, or part of a document.

The DOM has several interface’s
over which you can access the data**/**information
held by the DOM.

This page lists all the HTML elements, which are created using tags.

Element is the most general base class from which all objects in a Document inherit. It only has methods and properties common to all kinds of elements. More specific classes inherit from Element.

At its heart, HTML is a fairly simple language made up of elements, which can be applied to pieces of text to give them different meaning in a document (Is it a paragraph? Is it a bulleted list? Is it part of a table?), structure a document into...

Please add this code before closing of body section /body> it will work fine. You have added the code after /html> which is wrong. You should use all these codes under your body section.

I pressed the “SHIFT - Refresh” keys and I have passed 8/13 now.
Thanks

i am having the exact same freaking problem

gone to the CSS. Refreshed for few times and it worked. Tnx